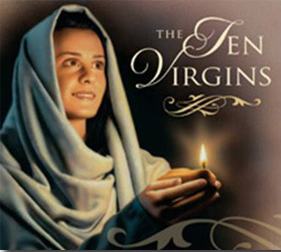 Remember the Bride and Groom of our previous Pen? We left off after the Groom (Jesus) left to go and prepare a place for his bride. Here is an additional view of the Kingdom of God from one of Jesus’ parables. Read:

1 “At that time the kingdom of heaven will be like ten virgins who took their lamps and went out to meet the bridegroom. 2 Five of the virgins were foolish, and five were wise. 3 When the foolish ones took their lamps, they did not take extra olive oil with them. 4 But the wise ones took flasks of olive oil with their lamps. 5 When the bridegroom was delayed a long time, they all became drowsy and fell asleep. 6 But at midnight there was a shout, ‘Look, the bridegroom is here! Come out to meet him.’ 7 Then all the virgins woke up and trimmed their lamps. 8 The foolish ones said to the wise, ‘Give us some of your oil, because our lamps are going out.’ 9 ‘No,’ they replied. ‘There won’t be enough for you and for us. Go instead to those who sell oil and buy some for yourselves.’ 10 But while they had gone to buy it, the bridegroom arrived, and those who were ready went inside with him to the wedding banquet. Then the door was shut. 11 Later, the other virgins came too, saying, ‘Lord, lord! Let us in!’ 12 But he replied, ‘I tell you the truth, I do not know you!’ 13 Therefore stay alert, because you do not know the day or the hour” (
Matthew 25:1-13).

In the Chapter before the contents were as the follows; the disciples asked Jesus what would be the sign of His coming or may I say the Bridegroom coming for his bride and the end of the age. (Matt 24:3) Jesus continues to teach his disciples about the sudden coming and the trouble times along with those who will seek to turn the church’s attention and affection from the coming Messiah. I will come back to this later.

We just talked about the Aglow Board having a season of change. This world is experiencing a spiritual seasons of change. In the same chapter Matt. 24:32-51, Jesus instructs his disciple about seasonal change of the last days by using the fig tree. Jesus says, “32 “Learn this parable from the fig tree: Whenever its branch becomes tender and puts out its leaves, you know that summer is near. 33 So also you, when you see all these things, know that he is near, right at the door.”

It is a small part of the verse but it is powerful: When ever its branch becomes tender and puts out its leaves. Remember, He is the vine and we are the branches. I know we are talking about vine verses fig tree; however, the principle in both symbolic picture is the same for the body of Christ. The Lord warns of our affections can be stolen and we would loose our tenderness because we are no longer grafted into him as we are lured away. That is why his warning continues by saying in verse 42-44:

42 “Therefore stay alert, because you do not know on what day your Lord will come. 43 But understand this: If the owner of the house had known at what time of night the thief was coming, he would have been alert and would not have let his house be broken into. Vs. 44 Therefore you also must be ready.

He warns us to be ready. Does that remind you of another parable? I bet you thought I forgot about the Ten Virgins. Five of the ten virgin were not ready when the Bride Groom came. There was no “oil in their lamps”. I guess you can say, their affection are stolen because they are no longer tender to the things of the vine. Are you following me?

Jesus reinforces the importance of being ready and to be found doing his will at the ending of verse 51- “and will cut him in two, and assign him a place with the hypocrites, where there will be weeping and gnashing of teeth.” Chapter 24 leaves with us with the instruction to take care of his slaves while the Master/Groom/Messiah is away. Lets get back to the 10 Virgins. Nothing was pointed out as being difference between the 5 foolish and the 5 wise except the oil supply. The word did not speak of needing oil until the Groom came at night when it was dark. The five foolish Virgins were willing to bring their lamps, but not the oil. The five wise Virgins not only brought oil but also brought extra just to be prepared.

It sounds to me that the 5 foolish lived on a belief that it was not necessary to prepare for the event of the Groom because they will not need it, but then again they did not know that He was coming in the dark. We learn from this parable that they could still go and buy oil, but it was to late for the first coming of the Groom. Are we speaking about salvation here? Are we seeing the results of affections that have been stolen? Perhaps, they lost their tenderness (intimacy) to the Vine when their affections have gone a strayed?

Let pull another verse into this picture. Matthew 7:21-24

Verse 24, “Therefore everyone who hears these words of mine and puts them into practice is like a wise man who built his house on the rock.” Could it be that the 10 Virgins carrying their lamps represents their belief system. After all, they all think they are responding to the call (hearing the words) of the Groom? In Matt. 7:21, “Not everyone who says to me, ‘Lord, Lord,’ will enter the kingdom of heaven, but only the one who does the will of my Father (puts his words into practice) who is in heaven.”

Then we would be safe to say that the all 10 Virgins were putting into practice what they believed by carrying the lamps with them; however, the 5 foolish appear to have a limit and lack the contents for their faith called oil. Did their ears hear the whole invitation of the Groom? Did they lack revelation of what was expected or did they feel it was unnecessary? The word does not reveal that information but when you hold up in the mirror of other verses a common thread of message appears. Notice the word “wise”. Here the wise man is honored because of building his house on the rock. The wise Virgins are honored by entrance to the Wedding Ceremony. The foolish man lost everything for building on sand, the foolish brides missed the entrance plus they were told, “I do not know you!” In Matt. 7:23, tells about individuals that reason that they did works of the Father, yet they heard, “I never knew you.” The repeated principle here is be ready! Build up your belief system on the rock, his words, prepared with oil. Last but not least, “Be about the Father’s business!